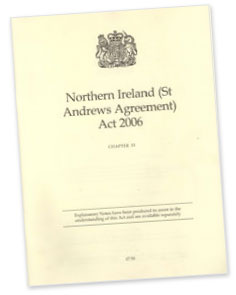 The Assembly was suspended on 14 October 2002 and Northern Ireland returned to Direct Rule from Westminster. This was the second major suspension, the first having taken place between February and May 2000. This suspension lasted until 8 May 2007. It was restored following the St Andrews Agreement, reached in St Andrews, Scotland, in October 2006.

The UUP and the Social Democratic and Labour Party (SDLP) had been the main negotiators of the Belfast/Good Friday Agreement in 1998. This time, at St Andrews, it was the Democratic Unionist Party (DUP) and Sinn Fein (SF). They had emerged as the largest parties in the second Assembly election, on 26 November 2003.

Negotiations At St Andrews concerned issues such as Sinn Fein’s support for policing and the operation of the institutions set up under the 1998 Agreement. The DUP wanted Sinn Fein to endorse the PSNI (Police Service of Northern Ireland) and sought changes to the way the Assembly operated. Sinn Fein wanted to ensure that all parties would participate fully in the power-sharing Executive Committee and observe the joint nature of the Office of First Minister and deputy First Minister (OFMdFM). In the 1999-2002 Assembly, the DUP had not participated fully in all the institutions set up under the 1998 Agreement.

Practical changes to the institutions

See below for the main changes arising from the St Andrews Agreement: