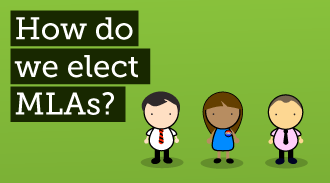 Why do we write numbers on ballot papers when electing MLAs to the Northern Ireland Assembly?

In an election, we choose the people we want to make decisions on our behalf. Although we live in a democracy, we can’t all have a say in every decision. So we elect people to form a government and make laws and decisions that represent our views.

There are different ways to elect people. In Westminster elections, voters put an X beside the name of one candidate they want to represent them in the UK Parliament. The candidate with the most Xs wins and becomes the Member of Parliament (MP) for that constituency. This system is called 'first past the post’.

In elections to the Assembly voters use numbers to rank candidates in order of preference: 1 for first choice, 2 for second choice and so on. Voters elect more than one candidate. In the Assembly elections, they elect five MLAs per constituency and there are 18 constituencies. This system is called Single Transferable Vote (STV).

Watch the video to find out more…