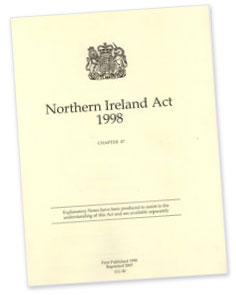 The Belfast/Good Friday Agreement was an international agreement between the British and Irish Governments, lodged with the United Nations. It was reached by a talks process involving most of the political parties in Northern Ireland.

This Act repealed the Government of Ireland Act of 1920, which partitioned Ireland. The new law now stated that:

The Act allowed Westminster to devolve power to Northern Ireland. It set out the powers of the Assembly and Executive in relation to transferred, excepted and reserved matters. It also stated that laws passed by the Assembly could not contradict European law and Human Rights legislation. It listed the stages in the legislative process and set out how cross-community support for certain decisions would be determined.

It outlined the election process for appointing the First Minister and the deputy First Minister. This part of the Act was amended after the St Andrews Agreement changed the method of appointment. The Northern Ireland Act 1998 has been amended several times to reflect changes to the operation of the Assembly and Executive over time    .