Why Do We Have the Assembly? 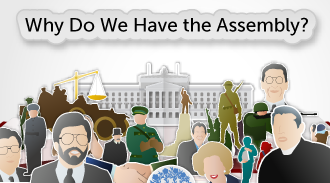 The Assembly was set up after the Belfast Agreement was reached on Good Friday, 10 April 1998. This is also known as the Good Friday Agreement. It was the result of talks between political parties in Northern Ireland and the Governments of the United Kingdom and Ireland.

The purpose of the was to find a way of ending 'The Troubles' of the previous 30 years and to make sure that the different communities could have their say on how Northern Ireland would be governed in the future.

Because of its troubled history, it was agreed that Northern Ireland should have a special type of 'power-sharing' government, in which political parties representing different sections of the community would share the power to govern Northern Ireland.  For example, the positions of First Minister and deputy First Minister would be shared between representatives of the two largest communities in Northern Ireland, Nationalist and Unionist.

Explore the timeline to find out why the Northern Ireland Assembly was set up in 1998.