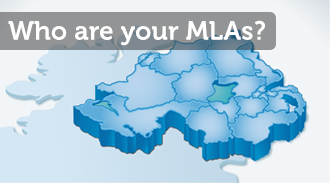 Which constituency do you live in and who are your MLAs?

People vote for candidates they think will make good MLAs. Most MLAs belong to one of the political parties. Before an election, each party produces a manifesto that tells voters what it believes in and what it plans to do if it is elected.

You can vote in elections and stand as a candidate when you are 18.

The results of the last election to the Assembly on 2 March 2017 were:

What do you think about their choice?