How a Law is Made 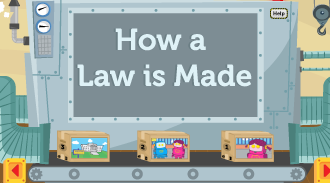 Laws are rules to protect people and help a country or region to run smoothly.

Where do laws come from?

There are laws about everything, from driving to teaching in schools. In Northern Ireland, the Assembly can make laws about different issues that affect us. These include hospitals, schools, policing and the environment.

Making a law can take a long time. An idea for a law is called a Bill. MLAs have to think about the Bill before it can become a law. Most of the MLAs have to agree that the Bill is a good idea before the Assembly will pass it. Once the Assembly passes the Bill, it becomes a law.

Watch our robot characters, Charlie-Bot and Zoe-Bot, discover what laws are all about.