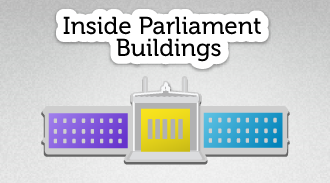 Parliament Buildings is the home of the Northern Ireland Assembly. The Assembly was established after the Belfast/Good Friday Agreement of 1998.

The building was the home of the Northern Ireland Parliament. It opened in 1932. The Parliament used two chambers, the House of Commons and the Senate, to conduct the legislative process. It continued until 1972 when it was prorogued after civil unrest.

All this happens in public view. Anyone can sit in the Public Gallery to view a plenary session. The Assembly Website broadcasts the proceedings live at www.niassembly.gov.uk with archive footage also available on the Assembly website and at BBC Democracy Live news.bbc.co.uk/democracylive/hi

The Senate Chamber is no longer a debating chamber. It is now used as a Committee meeting room. It retains its period features, but is also equipped with the cameras and microphones required to broadcast and record committee proceedings.

The Great Hall greets visitors as they arrive at Parliament Buildings. It is used as a central meeting area and is a very busy space when the Assembly is in session. Journalists conduct interviews and press conferences, people congregate before meetings, and visitors come to see the Assembly in action and tour the building.

Explore the model of Parliament Buildings to find out how it fits together.