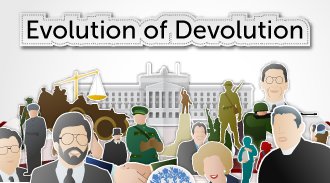 How has history influenced the way the Northern Ireland Assembly and Executive operate today?

The Northern Ireland Assembly model of devolution is very different from the old model. From 1929, the Northern Ireland Parliament was elected using a 'First Past the Post' electoral system based on the Westminster system. The party that won a majority of the seats in the election formed the government. This was always the Unionist Party.

The system established by the Belfast/Good Friday Agreement (1998) is a power-sharing, consociational model of democracy. The political scientist, Arend Lijphart, designed this model of democracy for societies where there has been, or is potential for, conflict. The Northern Ireland model is unique. It takes account of our political history. It is a power-sharing arrangement between the two main political communities in Northern Ireland, unionist and nationalist.

There have been changes to the operation of the system since 1998.

Under the Hillsborough Agreement (February 2010), powers over policing and Justice were devolved, creating an additional government department. The Stormont House Agreements of December 2014 and November 2015 ('Fresh Start') reduced the number of government departments  from 12 to nine (effective from May 2016) and the number of MLAs from 108 to 90 (effective from March 2017 election). An Official Opposition was also established.

The Executive Committee now consists of the First Minister and deputy First Minister, and 8 other departmental ministers. This is mandatory coalition, which means that it is based on the strength of the mandate given to parties by voters in the election. A mathematical formula known as 'D’Hondt' is used to determine membership. Until 2016, the four main political parties had seats on the Executive Committee under d'Hondt, with the fifth largest party (Alliance) also represented, due to election of their candidate as the Justice Minister. This election of one Minister is a special arrangement due to the sensitive nature of policing and justice issues, given our history of conflict. In May 2016, an Official Opposition was established for the first time. Although the UUP and SDLP were entitled to one minister each under d'Hondt, they opted out of the Executive to become the Official Opposition.

Many events influenced the model of devolution we have today. View further information, archive photos and video footage on our Evolution of Devolution timeline.